Welcome to the city of Dewas, which is located in the Malwa plateau and is an old town in Madhya Pradesh. The city is administrative center of the Dewas district. Two theories prevail about the name of the city , one being that Dewas lies on the foot of Chamunda hill on top of which is the shrine of Goddess Chamunda, from which the name is derived Dewas (dev-vas) meaning Devi Vashini or the Goddess residence (abode of the Deity or God).The other theory is that maybe the name was given as a mark of respect to the founder of the village Dewasa Bania. Dewas is a fast-developing industrial town with the government’s bank note press located in the city. 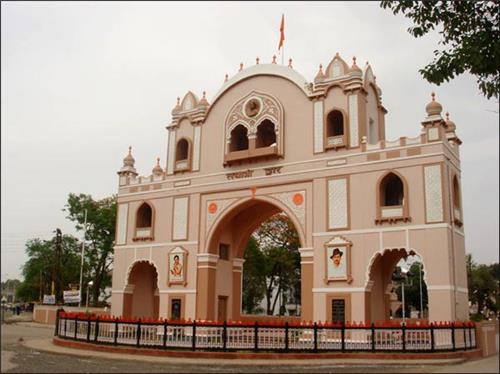 Located at a distance of nearly 143 km south west from Bhopal, the state capital and 35 about km from Indore the commercial capital of the state it holds a very important position in the overall economy of the state. Dewas has a cosmopolitan culture with people of different religions living in complete peace & harmony in the city. It holds lots of promise and is fast advancing in terms of infrastructure development with many markets, fast food joints & cinema halls present in the city. A beautiful & scenic town it has a number of tourist attractions & pilgrimage places like the Khivni Sanctuary, Chattries of Dewas, Khudel Devta, Meetha Talab Dewas, etc. attracting tourists from around the world. Being well connected via Rail, Air and Road routes, one can easily reach Dewas and explore the natural beauty of the place.

Dewas was formerly the capital of two princely states of British India and was ruled by the Puar clan of Marathas. During the first half of the 18th century the state was taken over by the brothers Tukaji Rao (Senior) and Jivaji Rao (Junior). The two brothers divided the state between them and afterwards their descendants ruled the region as a separate portion. Dewas states formed the part of Malwa Agency of the Central India Agency. The people of the region actively participated in the freedom struggle and after gaining independence from the British rule, the Rulers of Dewas surrendered their kingdom to Union Government of India. The states were merged into Madhya Bharat, which was a state of India in 1950. Later Madhya Bharat became a part of Madhya Pradesh state in 1956. Today the city is making fast progress and the people of the city are simple & hardworking folks. 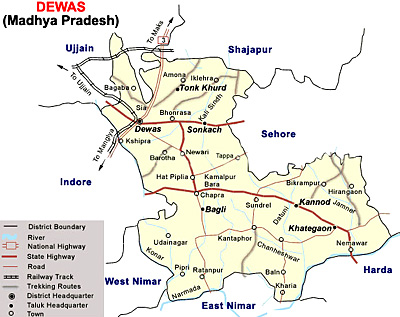 The city of Dewas is located to the north-east of Indore, south-east of Ujjain, and south-west of Shajapur. Situated on the level plains of the Malwa Plateau, the land rises gently merging into the Vindhya Range. From the Vindhya Range arise the Chambal & Kali Sindh Rivers which flow through the district before merging into the Ganges. Kshipra also known as holy river is the main river of Dewas providing irrigation to the farming lands. Lying at 22.96°N and 76.06°E, the city is nearly 535 m (1,755 ft) above sea level. The temperatures range from 20°C to 45°C in the months of March to June in summers thus the weather being very extremely hot and exhausting. The best season to visit Dewas is the winters in the months of October, November, December, January, Feburary and March. The weather remains comfortable during these months and one can explore places of interest in with ease. Monsoon season in Dewas, MP starts from the month of July and extends up to September with the rains bring new energy, enhanced natural beauty and rejuvenated greenery to the place.

Art and Culture in Dewas

Popularly referred to as the Holy city of Goddess Chamunda , Dewas is blessed with a rich cultural heritage. Folk songs are sung with great enthusiasm on special occasions like marriages, festivals and local village fairs. The most popular being the Malvi Songs. These songs are sung in the local dialect accompanied by music and dance. Dewas is also an important center of Classical Music with major National level programs like Kumar Gandharva Samaroh being organized here to promote Indian Classical music. The traditional dress of men is in Dewas is "Kurta-Dhoti" with a bandi, which is a kind of jacket and head gear. Majority of the women in Dewas wear Lehenga & Choli with an Orni or Lugra in rich vibrant colours, though other dresses like suits, sarees & western wear is also gaining acceptance amongst the residents of the city. Hindi & Maalwi are the main languages spoken in Dewas, though Urdu is also spoken in some areas. For More Click Here

The food commonly eaten in Dewas comprises of both vegetarian and non-vegetarian dishes which are cooked in the traditional way and savoured by all. The specialities include Bhutte ki Kees which is made from made of milk and corn and Chakki ki shaak – this steam dish is made of wheat. Being an industrial town people love to eat simple home-cooked food with lots of nutritional value. The hospitality offered by the people of Dewas is unmatched and many restaurants & eating joints present in the city offer delicious food, which is relished by both the tourists & local residents. For More Click Here

The yearly calendar of the Dewas is with a number of fairs and festivals, depicting the vibrant culture of the region. All major festivals like Diwali, Id, Dusshersa, Holi, Christmas, etc. are celebrated here with the same joy & fervour as in the rest of the country. Navratiri festival is celebrated in Dewas at a large scale due to the prescience of famous Maa Chamunda temple; during this festival the idol of Goddess is established in different parts of Dewas, and Garba dance is done. 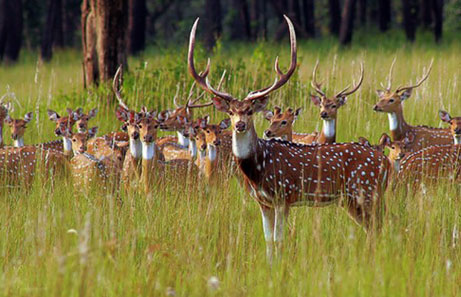 Literally speaking Dewas before being an industrial region was known as a holy place, with many religious places in its vicinity, the most famous being the Choti Mata (Chamunda Mata) and other Badi Mata (Tulja Bhavani Mata) Temples, Kela Devi Temple, Mahadev Temple (Shankar Garh), Grace Church, Kali Maszid, etc. A lot of devotees visit these religious places to pay their homage every year from far & wide. Besides these Dewas also boosts of other tourist attractions like Khivni Sanctuary, Kavadia Hills, Chattries of Dewas, Dewas Gates, Gidya Khoh, etc. mesmerising the visitors coming to the city. Being well connected to other parts of the country and the easy availability of buses, trains & local transportation helps to draw tourists to this region of MP. A number of good hotels & guest houses are present in Dewas which offer a comfortable stay & value for money. For More Click Here

In terms of shopping Dewas is not to be left behind with a number of markets, restaurants, fast food joints & cinema halls present in the city. Shrishti Market, Alankar Market and Shukarwaria Haat Bazaarare some of the popular shopping places in Dewas having many shops selling a wide variety of goods & things of daily needs. One can stop for a quick bite at the many restaurants and eatery joints in Dewas which serve the best of dishes ranging from local to cosmopolitan cuisines. Shoppers can wander around and explore the narrow lanes of Dewas bazaars and hunt for local handicrafts & souvenir. 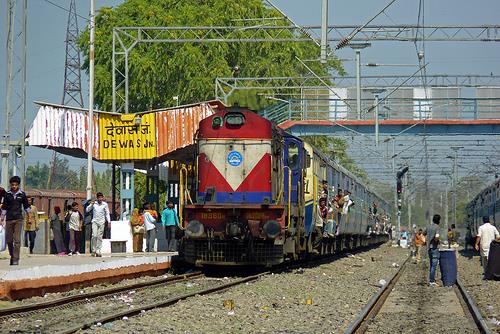 A well- developed transportation system helps you in reaching a place with ease and increases the tourism of a place. Dewas city in MP is very well- connected to other parts of the country by modes of rail, road & air. Dewas Junction (DWX), is a part of Ratlam Division of Western India Railways and is an important Railway station with many trains plying to & fro from the city. Situated on the NH3 National Highway No. 3 (Agra Mumbai Road), Dewas has an extensive network of National & State Highways like NH 86 and Dewas-Bhopal Corridor which connect the city to other major cities. The closest major airport to Dewas, is the Devi Ahilyabai Holkar International Airport in Indore, at a distance of about 40 km. One can choose from the different modes of local transportation like Buses, taxis, cycle-rickshaws and autos as per as their convenience.


Dewas at a glance