Art and Culture of Dewas

Dewas also famous as the holy city of Madhya Pradesh and boosts of rich cultural heritage dating back to hundreds of years. Influence of the Maratha culture & architecture can clearly be seen in the region be it food, buildings or lifestyle. Today people are adapting to changing times and modern ways of living, but they remain rooted to their ancient traditions. The unique folk dances, music and handicrafts are a visitor’s delight and give a glimpse of the art & craft of Dewas. During festival times and on other special occasions, residents of Dewas dress up in traditional costumes and sing & dance to the local music. Dewas also holds the pride of organising several music & cultural programmes like the Kumar Gandharva Samaroh which is held anually. 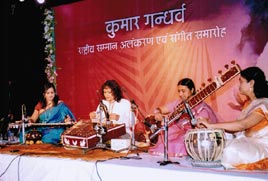 The traditional folk songs of Dewas are the Malvi Songs which are sung with great joy in the local dialect during marriages, festivals and village fairs. People not only love to sing and dance on the local folk music of the region but also have a keen interest in classical music. Dewas is known to be a major center of Indian Classical Music with Two National level Classical Music programs organized here every year. Kumar Gandharva Samaroh is one such program is organised by the Ustad Alladuddin Khan Sangeet Academy, Bhopal in coordination with the MP Government every year. Young Artists are awarded with Kumar Gandharva Samman and an amount of Rs. 51,000/- in this program. The second Program is organised by Kumar Gandharva Sangeet Academy, Dewas in which hundreds of music lovers participate. Pandit Kumar Gandharva Ustad Razzab Ali khan, Shri Babulal Verma, Smt. Vasundhara Komkali are some of the famous personalities associated with dance & music of Dewas city.


Religions and Festivals in Dewas

Dewas city is having a population of nearly 1,563,107 and majorly comprises of Hindus, though a considerable number of Muslims, Christians & Sikhs also reside in the city. The residents of Dewas have a mutual respect for each other, and live in complete peace and harmony. A large number of people in Dewas are staunch devotees of Maa Chamunda and Lord Shiva and regularly visit the temples of the deities present in the City. The idol of Goddess Chamunda is established in different parts of the city during the festival of Navratiris, and people do Garba on this occasion.

People of Dewas city in MP celebrate all major festivals with great joy & enthusiasm. Diwali, Holi, Mohaaram, Id- ul-Fitr, Raksha-Bandhan, Makar Sankranti, Shivaratri, Ganesh Chaturthi, etc. are some of the main festivals celebrated in Dewas. Due to presence of a number of temples in the area, regular fairs are also organised on festivals in Dewas attracting a large number of pilgrims from adjoining areas. National Festivals like Independence Day and Republic Day are also celebrated with equal enthusiasm & fervour.

Dewas city like the rest of India, has people of different communities & religions living in total peace & harmony, speaking different languages. Besides the common languages like Hindi, Punjabi & Urdu the dialect or tone of the area is called Malwa or Malvi. Hindi is the official language of this district also, with most of the government work being carried out in Hindi & English.

People of Dewas city in MP, wear traditional clothes in rich and vibrant colours depicting the culture of this region. The traditional dress worn by Men in Dewas, MP is Kurta & Dhoti, mostly made in white or contrasting colours. Women of the city wear colourful lugda, blouse and lehanga; accessorised with payals, bangles and bindis to make the look complete. Nowadays men & women have started wearing western clothes like jeans, shirts, frocks, etc. to keep pace with the changing times and for convenience. Though dressing up in the traditional attire is still preferred on special occasions and festivals.

Every region has a unique craft, perfected by centuries of craftsmen and passed through generations from mother to daughter and father to son. Dewas region in MP is also known for its local craft the most famous being terracotta work, which is the speciality of the region. Tourists coming to the city do not forget pieces of terracotta craft from the shops in Dewas for themselves and their loved ones as souvenirs. Other traditional Handicrafts of the region include Mojri (Shoes), Synthetic Carpets, Sofa Set Covers, Leather Works (Begs, Belts, Purses, Shoes, Briefcases, etc.) which are a source of income for the local artisans.